Canada’s Nicholas Latifi will continue his quest for the FIA Formula 2 Championship title when racing resumes this weekend at the Hungaroring circuit in Hungary (2 – 4 August).

Nicholas heads to the venue, located on the outskirts of capital city Budapest, second in the championship, having taken three wins so far this season.

After a difficult time in Austria, Nicholas returned to the podium places at the most recent round in Britain and closed the gap on the F2 title lead.

Fresh from a three-week break, Nicholas will be back behind the wheel of his DAMS-run car for this weekend’s eighth round of the 12-event season.

“I’ve had some good results in Hungary before, so I’m feeling very positive about the week ahead,” said the 24-year-old, a previous visitor to the podium at the circuit in Formula 2.

“It’s a very different type of circuit to Silverstone. The Hungaroring is tighter and more twisty, a little like Monaco, so there’s not a lot of time for the tyres – and the driver – to cool down.

“Budapest in the middle of summer is often very hot as well, so it’s important we keep a close eye on tyre degradation.

“I’m eager to get going again after an exciting weekend at Silverstone where I got my momentum back after a tough few rounds.”

“After a difficult period, Budapest was a turning point in understanding the new F2 car and how best to adapt myself to it,” he explained.

“From then on it was an upward trend, so I’m looking forward to going back there and putting that experience to good use.”

The 4.38km Hungaroring is sometimes likened to a kart track because of its narrow and twisty nature, while the lack of long straights makes overtaking difficult. It’s a circuit where it is important to have good one-lap pace to secure a strong grid position.

“Qualifying at the front at this track makes the races easier, and I know I can be competitive there from previous experiences,” Nicholas said.

“I’ve consistently been towards the front in qualifying this year, and that’s been crucial in getting the points, so it will be important to try and continue my charge.

“Obviously I’d love to get a pole position, but being more consistent across the whole year is more important for me.”

Nicholas’s race weekend begins on Friday with practice and the qualifying session, which determines the grid order for Saturday’s 37-lap Feature Race at 1010hrs (GMT+2). Sunday’s reverse-grid 28-lap Sprint Race will have lights out at 1125hrs. 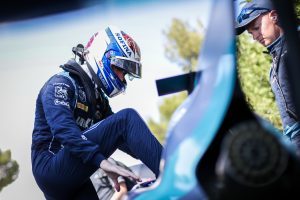