Nicholas adds Sochi FP1 to his Formula One programme

Nicholas Latifi will tackle his third Formula One Free Practice of 2018 at the upcoming Russian Grand Prix in Sochi (28 – 30 September).

As part of his test and development role with the Racing Point Force India F1 Team, 23-year-old Nicholas will drive the team’s latest VJM11 chassis at Friday’s FP1 session. He will take the wheel of Sergio Perez’s car for the opening 90-minute stint around the Sochi Autodrom.

It will be Nicholas’s fifth outing in the team’s 2018 challenger, following similar appearances before the Grands Prix in Canada and Germany and development days in Barcelona and Hungary.

“It’s exciting to get another opportunity to take the wheel and to build experience of a Grand Prix weekend,” Nicholas said. “I drove the car for more than 450km at the Hungaroring in July and now I’m looking forward to returning to an FP1 – it’s a completely different challenge.

“It’s important to keep learning and building on my F1 experience. This will be my third FP1, and with each one I’m getting more and more comfortable in the car. My main goal is to do a good job for the team – to bring the car back in one piece with good data and feedback after some quality running.

“I have been to Sochi only once before, back in 2015, but it’s important I build the speed as quickly as possible. What we do in that session is going to directly influence the race weekend.”

The Russian Grand Prix also plays host to the penultimate round of the FIA Formula Two Championship, meaning Nicholas will have a full schedule for the weekend.

“It will be the first time that I’ll be mixing an FP1 session with an F2 round and I’m looking forward to seeing how that will turn out,” he said. “The Friday sessions are back-to-back, so I’ll literally be jumping straight out of the F1 car and running over to the F2 paddock for the practice session.” 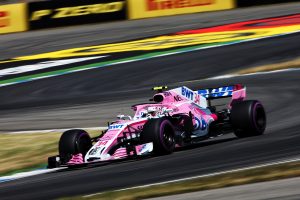