Latifi strikes back with fourth win of 2019

Canada’s Nicholas Latifi returned to winning ways as he claimed his fourth victory of the 2019 FIA Formula 2 Championship with an emphatic display in Hungary today.

The Canadian took three wins across the opening three rounds and remained in firm contention for the title despite being hindered by a number of incidents and setbacks.

On Saturday at the Hungaroring Nicholas seized his opportunity at the start, surging from P3 on the grid to take the lead by the time the field exited Turn 1.

He controlled proceedings throughout the course of the 37-lap Feature Race, running a standard Option/Prime tyre strategy, and comfortably had the edge on his rivals.

“Most of the hard work was done in the first corner,” Nicholas explained. “I got a decent start, then Nyck [de Vries] locked up and I was able to get the cut back. That was the key to the race.

“I had good pace on the option tyre at the beginning and was able to pull a gap and extend the stint a bit. The guys at DAMS did a great pitstop and I came back in front. After that it was all about management.

“I’m really, really happy to get the win after a few too many races off the top step – it’s a big day. Thanks to the team for providing me with an amazing car.”

Nicholas’s attention now turns to Sunday’s 28 lap Sprint Race, which is due to start at 1125hrs (GMT+2). 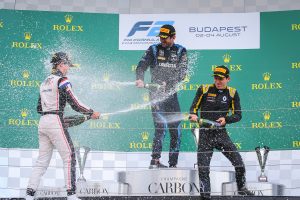 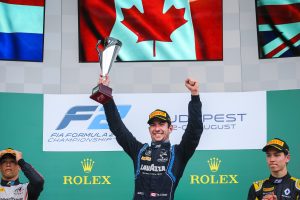 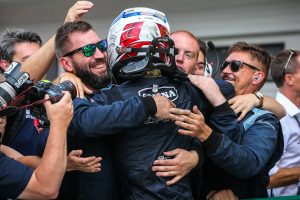