Nicholas Latifi extended his title advantage in the FIA Formula 2 Championship in the wake of another race-winning weekend, this time in Spain.

Latifi arrived at the Circuit de Barcelona-Catalunya leading the Drivers’ Championship after starting the 12-round series with victories in Bahrain and Azerbaijan.

The Canadian started from P2 and bided his time in Saturday’s Feature Race before picking off long-time leader Guanyu Zhou to move to the front of the pack. The 23-year-old preserved the lead for the remainder of the race to chalk up win number three, continuing a successful start to 2019.

Latifi’s win meant he started from P8 in Sunday’s Sprint Race in hot and sunny conditions, and he fought back after relinquishing a spot on the opening lap.

He passed three rivals to move into P6 at a circuit where overtaking opportunities are limited, and also grabbed the additional points on offer for setting the race’s fastest lap. He now holds a 26-point advantage over nearest rival Luca Ghiotto in the Drivers’ Championship.

“Coming into the weekend riding the momentum from Baku I felt quite confident,” explained Latifi.

“I had a good practice and qualifying – but it was still slightly frustrating to miss out on pole position! In the Feature Race I settled into P2 and played the long-game. When I decided to push I had a pace advantage and it was enough to take the win, which I was really happy with.

“Sunday was all about trying to add to the points tally. I made a bad start and as Sprint races here can be quite processional, especially with the DRS train, you need a big pace advantage.

“I sat back and was patient and then I started to push on and got P6 and the fastest lap – and those points are like gaining another position.

“I’m happy to score more points and preserve quite a healthy lead in the championship.”

Latifi will remain at the Circuit de Barcelona-Catalunya in order to add to his Formula 1 experience as part of his duties as ROKiT Williams Racing’s Reserve Driver. He will drive the squad’s FW42 on Tuesday and Wednesday during Formula 1 post-race testing.

“It’s good to have another outing with the team,” said Latifi, who first drove the car in Bahrain last month.

“I should get quite a lot more mileage which will help me get more comfortable ahead of my FP1 runs later this year.

“It’ll be important for me to get a good feeling in the car so I can jump straight in during practice and help the team with the updates and developments they have planned.”

Latifi’s Formula 2 season will resume on the streets of Monaco from May 23 to 25. His racing programme is supported by Lavazza, Sofina and Royal Bank of Canada. 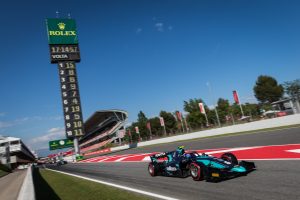 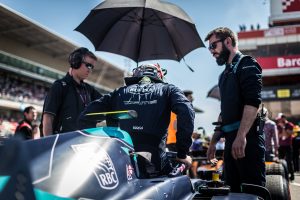