Nicholas Latifi took points out of the FIA Formula 2 championship leader after two thrilling races at the historic Silverstone circuit in Great Britain this weekend.

The 24-year-old Canadian was keen to reignite his challenge in the wake of setbacks in recent rounds that prevented him from turning race pace into points.

Nicholas finished a close runner-up during Friday’s opening practice session and built on the performance by qualifying in P4 for Saturday’s Feature Race.

“P2 in practice set a good base for qualifying and finishing that session P4 on the grid was decent, but equally a little frustrating as the car wasn’t 100 percent,” he explained.

“On both my laps, and more specifically my second lap on new tyres, I had an engine rev limiter issue which cost me a chance to be P2 and maybe even a shot at pole.”

Starting the Feature Race from the second row on the grid, Nicholas stormed into contention as he scythed past DAMS team-mate Sergio Sette Camara into the Maggots/Becketts complex before later overhauling Guanyu Zhou in the pits.

A strong out-lap gave Nicholas the chance to battle Luca Ghiotto and the pair scrapped furiously for the lead before Latifi consolidated P2 for an additional 18 championship points.

“It was a very fun first 12 laps or so! I made some nice aggressive moves, and my team did an amazing pit stop, meaning I was able to get out in front of Zhou,” Nicholas reflected.

“That released me to push flat out on cold tyres to try and undercut Ghiotto, which was fun, and I managed to dice with him for the lead for a few laps. I got ahead, but unfortunately didn’t have the outright pace to hold on.

“It was a bit disappointing but nonetheless I was happy to be back on the podium after a difficult few rounds where we were not scoring the points we deserved.”

Nicholas therefore lined up P7 for Sunday’s reversed-grid encounter and he made up positions to classify in P5.

“The goal was to move forward, though I knew it would be difficult and that most of the job would be done at the start because it’s so tricky to overtake at this track,” he explained.

“I got a decent start, picked up a few positions, but after fighting hard the first few laps my tyres were pretty damaged and I had to try and nurse them back. More valuable points was a decent result.”

The next round of the FIA Formula 2 Championship will take place at the Hungaroring, in Hungary, from 2-4 August. 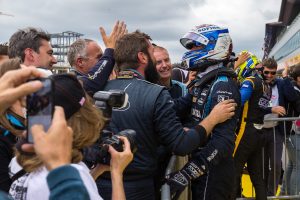 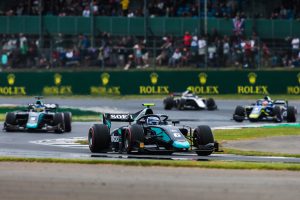