Nicholas Latifi continued his resurgent form in the FIA Formula 2 Championship by charging to two top-five finishes during this weekend’s races at the Autodromo Nazionale Monza, Italy.

A week after claiming a victory at Spa, the Canadian settled back into his place at the sharp end of the competition – taking P5 in Saturday’s Feature Race and P4 in a tight Sprint Race to bag 18 championship points.

“It feels great to come away with such good points after a strong weekend – especially because for the past two years Monza has been my weakest track in the calendar,” the 23-year-old said.

“Coming off the win last week I was carrying plenty of positive energy, and I’m happy to have been able to continue that run of form. It felt good to be battling at the same pace with the championship leaders. Okay, it’s where I feel I should have been at the beginning of the year – but it’s nice to be back!”

After qualifying in P5 – his best session of the season so far – Nicholas quickly settled into P4 in Saturday’s Feature Race, before the leaderboard was turned on its head.

“Like most teams we opted to start on supersofts and end on the medium tyre, because nobody expected the performance of the supersofts to drop off as quickly as it did,” Nicholas explained.

“That gave the three drivers on the alternate strategy a huge performance gain. We didn’t go for that strategy because starting from near the front it was a big risk – a safety car anywhere before the final seven laps would have ruined any advantage.”

Nicholas remained in the leading group on the same strategy until the pit window opened and they dived in for fresh rubber. Nicholas however, was forced to complete another lap before he could come in.

“My team-mate Alex had priority on the road so I had to wait an extra lap for him to pit before I could change my tyres,” he explained. “The team calculated this cost me six seconds – and that put me out of the fight. It was some some consolation to overtake Norris near the end for P5, but everyone was so similar on pace I couldn’t do any more.”

Starting Sunday’s Sprint Race from P4, Nicholas had a sense of deja-vu after a terrific start vaulted him into an early lead. “I thought okay, let’s go for a repeat of Spa!”

“Unfortunately I wasn’t able to maintain the pace I needed to stay clear of DRS, and at this track, if you are just a little bit quicker it’s a massive advantage. Lacking just two-tenths a lap was enough to slip back and I dropped to P4 – but I still had enough left to hold off Norris, who was coming back at the end.”

There is now a four-week break before Nicholas resumes his F2 campaign at the next round in Sochi (28-30 September). “That gives us a good amount of time for more analysis of went well at these two races and of course the areas we need to improve. The goal now is to keep up this positive momentum.” 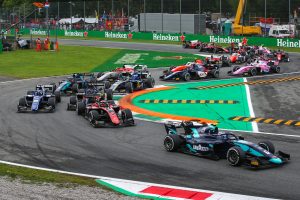