Back in the groove at Grove 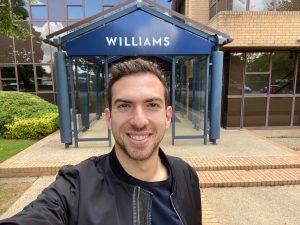 Yesterday was a long time coming. A total of 95 days to be precise. And yes, I was counting.

Heading back to the Williams factory for the first time since the Australian Grand Prix was cancelled on 13 March was a fantastic feeling. It marked a big step towards me and the team finally getting our 2020 season underway in Austria next month.

My first day back at the office was a busy one. As soon as I arrived I had a Covid-19 test to make sure I don’t have the virus right now. I then need to be tested again at the end of this month before heading to the Red Bull Ring. The test itself was fine – certainly not as invasive and uncomfortable as I thought it might be! The rest of my day was taken up with some sim work and media duties.

We did a lot of correlation work against our previous running in the sim and we also continued the general prep work for Austria and Budapest. I drove for a total of three hours in the sim.

Initially, it felt weird to be back in a proper set-up rather than driving the F1 game on my home rig. It’s a totally different experience. It took a few laps to get back up to speed and to dial out some of the driving habits you pick up on the F1 game. Let’s put it this way, you wouldn’t get away with them in real life!

The factory itself was quite empty because there’s still a lot of people working from home. But it was a superb feeling to get back to some proper work. Everyone I saw was very excited and positive to return. For many of them it was their first day back as well and I could clearly see the fresh motivation on their side.

I have another two days planned at the factory before the first race and I honestly can’t wait to head back to Grove again. We’re nearing the point where everything we worked so hard on during the winter can finally be put into practice at an F1 race weekend. It’s been a long wait. But hopefully it’s second time lucky for us as a team.