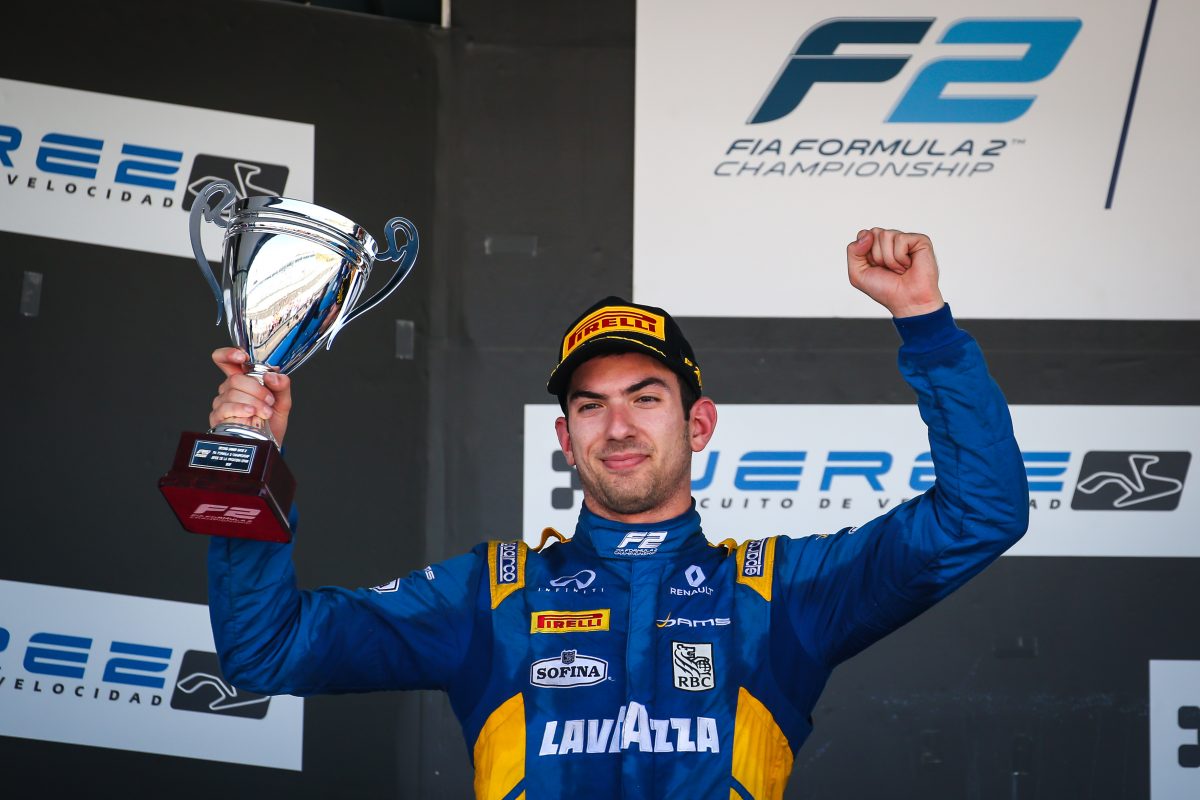 Nicholas Latifi delivered a brace of intelligent drives to claim his eighth podium of the season in the penultimate FIA Formula 2 Championship event of 2017 at Jerez in Spain this weekend.

P2 in today’s Sprint Race built upon P4 in yesterday’s thrilling Feature Race, in which the 22-year-old came within 1.2 seconds of taking victory.

After qualifying ninth on the 4.43km circuit, where overtaking is difficult, Nicholas and his Dams Racing engineers made the bold decision to start Saturday’s Feature Race on the ‘prime’ medium compound of Pirelli tyres, whereas his rivals started on the ‘option’ softer rubber.

Nicholas’s aim was to stay on track for longer than his competitors to gain track position before making his compulsory pit stop, and then benefit from being on the softs towards the end of the 39-lap race.

“We figured there was going to be quite a lot of tyre wear and we had nothing to lose,” he explained. “With all the drivers ahead on the opposite strategy, we hoped the race would come to us.

“The tyres were hard to manage at the start. I was forced to pit earlier than I wanted to, but when I rejoined I had fun coming through the field. The use of the DRS overtaking aid was suspended during the race, and not having it definitely didn’t help my strategy!

“I rose to P4 and, despite being much faster than the cars ahead, thought that was the maximum I was going to get. Then the Safety Car was deployed, so the field bunched up and I thought: ‘This is an opportunity to win the race’.”

When racing resumed, Nicholas found his attack stymied by back markers who did not yield track position to the leaders when the field was released by the Safety Car. He crossed the line in P4, just 1.235sec behind the winner.

“There were no blue flags to tell the back markers to yield to those of us who were fighting for the win and, in my opinion, that’s not acceptable from the race direction or the other drivers. I was frustrated because I know I would have won that race hands down without this situation.”

In Sunday’s Sprint Race, Nicholas started from P5 and quickly moved up to P2, but his main focus was trying to conserve his medium compound tyres.

“I’d already done quite a lot of sliding around on those tyres during qualifying and I knew wear would be an issue. I knew I could manage the tyres better than [race leader] Alex Palou due to his lack of experience of F2, but I also knew that Artem [Markelov] behind me was saving his tyres,” Nicholas said.

“I wanted to wait until the last five laps to attack Palou. Unfortunately, with Markelov pressing me, I had to go quicker. It meant that when I caught Palou, my tyres weren’t in good shape and I couldn’t follow him closely enough to overtake.”

Nicholas eventually got past, but not before Markelov had overtaken him, leaving the Canadian to claim his third runner-up finish of the 2017 season.

“Overall, we got good points from the weekend but it was a missed opportunity through bad luck. That Feature Race should have been mine,” he said.

The results consolidate his fifth position in the FIA F2 standings, with 156 points.

Nicholas, who is proudly supported by Royal Bank of Canada, Lavazza and Sofina in 2017, will now prepare for the final event of the season in Abu Dhabi on 24-26 November. 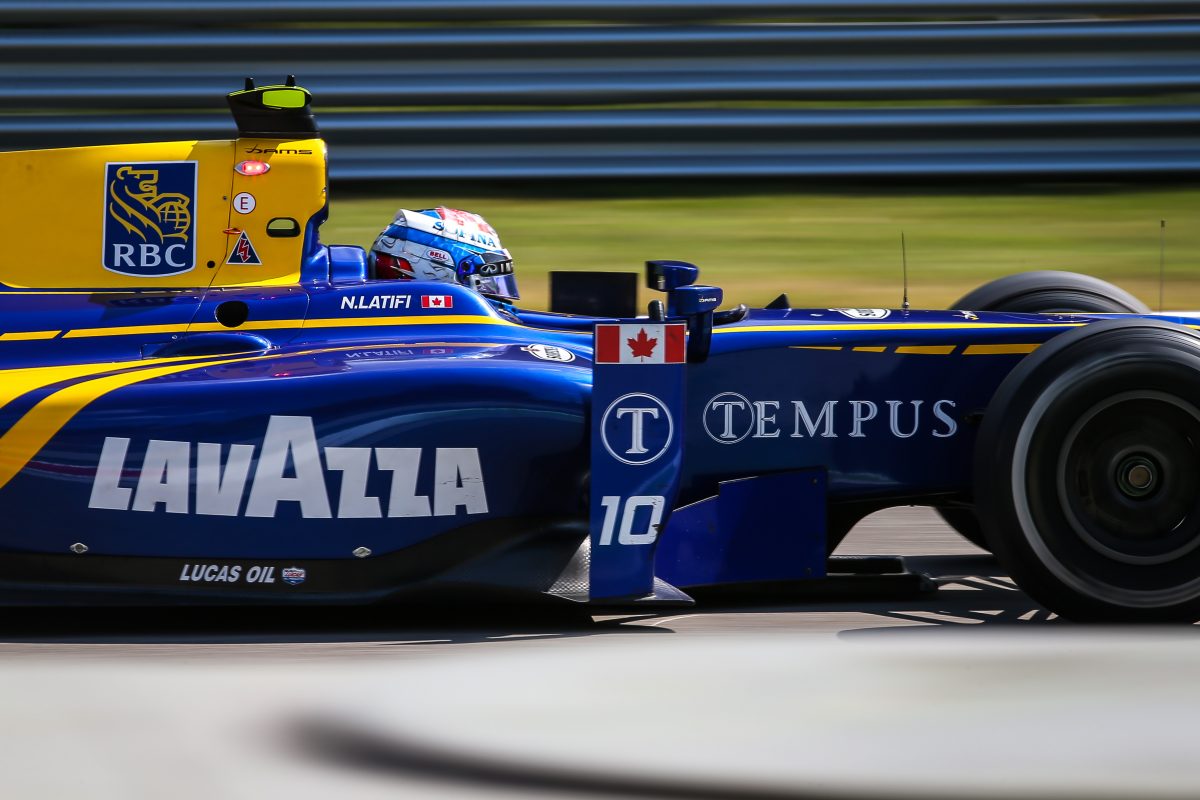 Nicholas Latifi is targeting a strong haul of points and further progress in the FIA Formula Two Championship when the penultimate round of the season gets underway at Spain’s Circuito de Jerez this weekend.

The 22-year-old is determined to bounce back from an up-and-down weekend at Monza last month, where he scored his seventh podium of the season in the Feature Race, but struggled to find his front-running form in the Sprint Race.

The DAMS Racing driver said: “I was left disappointed in Monza. I just didn’t have the pace. Having analysed things back at the shop, the team found a few little things that weren’t helping the car at all. That was some explanation, but there were things I could have done better as well.

“My objective is to bounce back in Spain. I dropped one championship position after Monza and now there are only four races left. A positive is that second place, which is the most realistic goal, hasn’t moved any further away from me. I’m 27 points behind second place and there are 96 points available. Closing that gap by outscoring the guys ahead has to be my goal.”

Nicholas, who is supported by Royal Bank of Canada, Lavazza and Sofina in 2017, is targeting a strong qualifying session, a pair of clean races and a weekend free of any mechanical gremlins as he bids to return to the F2 podium at Jerez.

He hasn’t raced at the 4.43km track for almost two years and, although the F2 teams took part in a pre-season test at Jerez late last year, it’s likely that Nicholas will need to spend most of Friday’s Free Practice session reacquainting himself with his surroundings – and in particular, a freshly-laid track surface.

“Jerez is a track I like quite a bit. My first experience racing there was in the World Series 3.5. It was good because I only joined the series for the last few races and I ended up finishing second in the final race, – that’s a good memory,” he explained.

“But the track was resurfaced about a month ago and that creates a big unknown. It remains to be seen how that will affect things; especially the tyre degradation. Before it was resurfaced it was a high degradation track but we’ll have to see what type of asphalt they’ve gone with. We won’t know the full story until the first race.”

Another development that is sure to make for an intriguing weekend is Pirelli’s decision to amend the tyre compounds that the F2 cars will run in Spain. Nicholas has shown himself to be a master of managing tyre degradation so far this season, but he knows he may have to learn some new tyre wear characteristics at Jerez.

“For sure, there’s a new track surface but there’s always some variation in the materials used. Considering this, Pirelli has made quite an aggressive tyre choice,” he explained. “They changed their initial medium and hard compound selection to medium and soft instead – a step softer. That’s going to be something new to discover and get used to.”